This ride is a mild where the only thing that puts this at an intermediate level is its distance and small sections of the singletrack along the southwest area of the lake.  The ride we did was roughly a 14 mile counterclockwise loop around the lake and consisted of a combinations of payment, cobblestone walkways, fireroads, and singletrack.

Here is a map the Ashinoko Lake area itself.  Take note that north is to your left on  this map.  I refer to the letters on this map in the trail description.

We started at south end of the lake near Point A.  There are plenty of shops and restaurants which makes this a nice place to start and end the ride from.  On clear days you are treated to a view of the lake with Mt Fuji in the background.  The picture to the left does it no justice whatsoever.  From here to point B is just pavement and sidewalks.

From Point A we proceeded counter clockwise around the lake.  At Point B is the entrance to a large shrine on the southeast end of the lake.  Unfortunately I did not take the time to check it out.  From here to about halfway to Point C is a walkway made out of alternating stone slabs, that make for a little bit of a bumpy ride.  From Point C to Point D is a closed-to-vehicles road that gains some elevations about the lake while being covered by a nice tree canopy for nearly the entire section.   At Point D, you have to get onto the surface streets for a bit.   You will soon pass under a gondola cableway that crosses over the street.  You will take the next small road to your left which is at Point E.

Here are some of the wonderful flowers we encountered along the eastern side of the lake.

From Point E, you are headed back down towards the lake.  You will pass through campground made up of nice cottages along a gravel double track.  You will soon be back along the shore at the far north end of the lake.  These two pictures were taken  at Point F where you cross over a flood control gate.  From here the "trail" is a gravelly fireroad. which continues that way until a little bit past Point G.

Here are some of the views from the west side of the lake looking east from Point G.  Right here is also were the Ashinoko Skyline trail connector meets with this trail (That trail is described below).

From Point G right along the lake the trail slowly gains some elevation above the lake where brings in better views.  The trail stays well above the lake for pretty much the entire western shore.   Soon the fireroad gives way to fairly buff singletrack which was easy to ride on yet would give a beginner mountain biker an interesting challenge or two.

Here are a couple of interesting views from around the lake.

From about halfway down the west side of the lake down to the south end the trail became rougher with more roots and rocks.  There are a few spots that would require just about any biker to dismount.  At around Point H the single track runs into a paved road where your only option is follow for about 3/4ths of a mile to a stoplight.  From there you will hang a left and follow the street back to Point A..

Some more of the flora of the Ashinoko area

While the Lake Shore trail is scenic it does not offer much in the way of a good workout.  I noticed some other trails on some of the maps in town so we set out to do some exploration of the area.  We started off by hiking a few sections of the Ashinoko Skyline trail to see if it was worth checking out on the bike.  After little bit of hiking we decided it would be worth a trip on the bike so we came back the following week.. 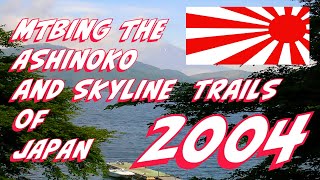