We got up a decent time after an incredible night of endless stars available from the near zero light pollution on top of Little Creek Mesa. We broke camp and headed off the mesa before 8:30AM with Moab as our destination. While on the road Bill (who had been to Moab a few times) talked of previous excursions and read aloud some of Lee Bridges take on the trails from his Mountain Biking Moab book. His book is really cool and informative. I picked up a copy for myself once we got in town. Personally it was well worth the money just to get some pictures of my good friend Jerry Daniels wearing lycra back in the 90s. But really between that guidebook and the maps I mentioned in the resources section the main trip page you should be good to go for getting on this ride. We made good time and ended up picking up a campsite along the Colorado river on Kane Creek Road nestled amongst a stand of cottonwoods.

There are numerous more options on Amasaback these days beyond just the 4WD route of Cliffhanger and Pot Hole Arch that we did in 2008. On my next ride out here I plan on hitting some of the purpose built MTB trails up here such HyMasa, Rockstacker and Captain Ahab. This is route I plan on doing on the next outing.

After sitting up camp we rode our bikes right from camp to the Amasa Back trail. This trail is stunningly beautiful with sheer sided bluffs all around. The opening section of this trail is a real punch in the face with no technical warm up. "I am Amasa Back, you better recognize!" was what I thought this trail was trying to say as I dropped down a series of steep rock drops and steps that led to sizable drop near the bottom. I balked on the drop at the bottom. 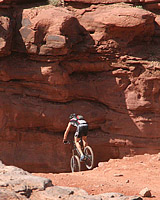 After this the trail descended some more before we crossed the smallish Kane Creek. I'm guessing it will be dry during the warmer months. Just after the creek the climbing starts as well an introduction into the particular flavor of loose superfine sand of this area. The climbing from here is somewhat steep and mostly technical. There are ledges a plenty, sections of slickrock, and rock chunk to negotiate as you knock out a good chunk of elevation gain. 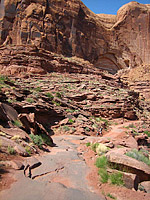 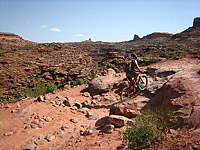 As my introductory ride in Moab, I was freaking amazed that jeeps ride this trail. It was clear to see from the scars on the rocks, that not all you venture this way make it to the top. We were at one particular spot trying to figure out how a jeep would navigate this thing, when along comes someone on their way down to shows us how it was done. I was freaking impressed. 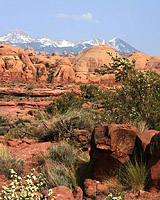 After the four-wheel school session was over, we continued working our way up the trail. The climb is no picnic as it is often steep with technical challenges all over the place. I was really enjoying the climb as the beauty of the canyon lands just keep unfolding as we continued to gain elevation. The La Sal Mountains to the south were snow capped and they contrasted incredibly with the rich red hues of the Moab rock. Even though at this time of day the light was still harsh for photographs, I could see how professionals photographers can be make a career with the canyon lands alone.

After a while we neared a saddle between three large “fins”. The climbing mellowed out at this point and the already awesome views just got better as Jackson Butte and Jackson Hole came into view to the west. It is worth noting that over the next few days my criteria for what constitutes an awesome view just kept getting higher and higher. You could easily become somewhat of a scenery snob if you lived here. 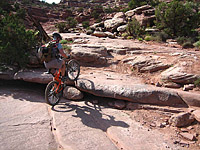 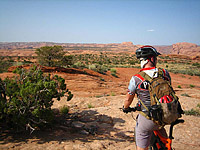 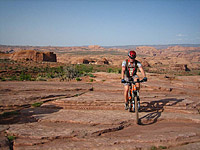 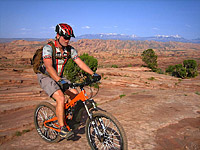 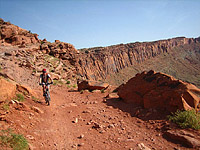 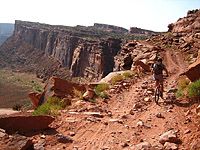 We were still doing some gawking while rolling when a spur road went off to our right. From what I read this spur road goes out across the mesa for about a mile or so to a viewpoint. We only took it a short distance to snoop around. After soaking in the beauty of this area as well as the La Sal Mountains to the south we continued along the primary Amasa Back trail. This trail is also know as Cliffhanger with the four-wheeler crowd. A befitting name when looking at what lay ahead. We dropped a little elevation and went by a couple of exposed sections that if I were in a jeep, I would be a little freaked out. I would have my exposure scale drastically readjusted on Poison Spider Mesa and the Portal trail in a couple of days. 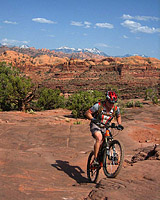 We worked our way out and around toward the highpoint on the rim that we could see ahead and a little to our left. There is a set of power lines that cross this mesa and descend down into Jackson Hole. Shortly after you go under these power lines you will see a double track off to your right. For the adventurous and highly skilled riders you can head out that way and hook up with the scary, gnarly, and highly exposed Jackson singletrack that goes down the riverside of the mesa coming out near Kane Creek trailhead. We were contemplating taking this route down. We pushed our decision until we were on our way back from the viewpoint. We continued on our way out and up to the viewpoint. After a while the jeep road just sort of stops and you free-form the rest of the way on the slickrock. There were some small cairns marking the way. Once out on the rim near the top the views were absolutely incredible. We evening light was starting to get really good and the colors on Jackson Hole and Butte were the stuff you remember for a lifetime.

A small slice of the view

After another round of scenery drool, we started heading back the way we came. We contemplated for just a bit about taking the Jackson trail but decided against it. We had just enough daylight should everything go as planned, meaning no buffer to work with and getting caught on an exposed rim-side trail after dark did not sound too appealing. The other reason was that the Colorado River was running high and we were unsure about how deep the Kane Creek crossing would be near it's confluence with the river. If this was combined with an after dark excursion, now things would be really interesting. 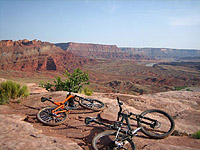 So we took the Amasa Back Trail back down off the mesa and man what a bunch of fun we had on this technically difficult doubletrack. If riding doubletrack is wrong then I don't want to be right. I had a great run back down the trail and felt like I finally shook off the Mojo sapping monkey that had been on my back every since my crash at Goat Camp. I hope the little bastard fell off the side of the mesa, never to be seen again. Now I was not riding with reckless abandon in some testosterone induced craze. No, I was back to riding with my own proper balance of the variables of confidence, skill, risk and reward. It felt really great to be truly “riding” again vice trying to avoid crash. 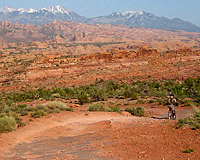 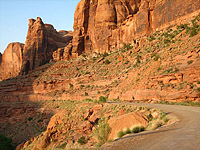 We finished up with plenty of daylight and second guessed wither we should have went for the singletrack. There is nothing wrong with having you first post-ride beer while watching the sun go down. The mesa walls of Moab are pretty darn impressive, it is something you really have to see in person to fully appreciate. Amasa Back is such an interesting mesa being surrounded on three sides by a meander of of the Colorado River. You could certainly speed days getting to know this place. I'll be back at some point to give this place it's due attention. 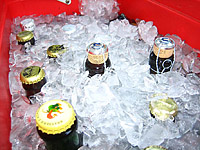 We continued with non-Utah beer enjoyment well into the night. The temps where nice enough not to need the rain fly again and I dozed (considering how much enjoyment I had that evening it may have been more like passed out) off while staring at the stars in between the leaves of the cottonwood tree above my tent. I do distinctly remember that neither my tent nor the stars were spinning that night. The plan for tomorrow was to catch the 10AM shuttle for a day out on the Porcupine Rim Trail.

On to Day 3 - The Porcupine Rim Trail