All of the topographic maps I have seen show Anderson Truck Trail as a jeep trail.  However it has been many moons since a Jeep could follow this trail which has turned into wonderfully technical bit of semi-singletrack for the better part of its length.  The trail has been in use in one fashion or another for over 75 years. It is located about 20 miles east of San Diego near the town of Alpine.  While this trail is rather short (around 8-10 miles) it gives you a good workout and rewards you with some singletrack fun and a blistering downhill return to your car. 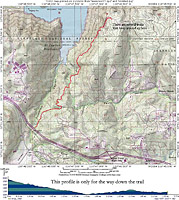 Here is an old school map of Anderson Truck Trail.

This route is for ATT, Finding Neo and Spicolli 3 and lower bit of 2 (GPX File)

Directions:From San Deigo take Interstate 8 East to the Harbison Canyon Exit. Go straight onto Alpine Blvd. Take Alpine Blvd to Peutz Valley Rd., which goes under the freeway. Park under the freeway bridge or near the junction with Alpine Blvd. Get directions from your current location.    Do Not leave valuables in your vehicles as break-ins ocassionally happen here.

Trail Notes: The pictures here are a mixture of pictures dating back to as early as 2002. The entire area burned in a 2003 wildfires and received rain damage from the 2004/5 record breaking period of rain.

ACCESS ISSUES: Anderson Truck Trail is over 75 years old and has been in use by various user groups pretty much continously in one shape or form.  For the last 25+ years it has predominately been used  by mountainbikers. The trail however crosses a patch work of land ownership that has lead to access issues over the years. The uppermost portion of Anderson Truck Trail along with a network of freeride/technical trails known as World Cup are/were on the Capitian Grande Indian Reservation.  Tribal leadership ultimately put up fences, gates and got serious about keeping people out.  Those trails are no longer accessible and as of 2021 they have, for the most part, been reclaimed by mother nature. The middle and lower portions of Anderson Truck Trail are a mix of USFS and private properties. The USFS does recognize Anderson Truck Trail and some of the side trails but there is no legal public access onto that USFS land   One of the private properties is owned by the San Diego River Park Foundation  (SDRP) which accquired that property in 2011. One of their conservation values for this property is Anderson Truck Trail. The San Diego Mountain Biking Association participated in the fund raising effort and donated towards the purchase.  I think eventually those remaining private properties will move into public trust and Anderson Truck Trail will be come a fully blessed trail system. With that said, the area is currently unsanctioned and not a secret to any goverment agency of interest . 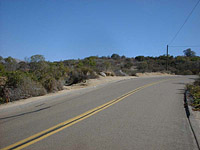 From your parking spot under or near the freeway bridge, climb up Peutz Valley Road. Take note of the old nursery on your left about half a mile in. At 3/4ths of a mile, look for the trail off to the left side of the road. (The boring picture to the left is where that is). This is the orginal entrance to Anderson Truck Trail. The extreme northeast corner of that nursery property you wnet by just touches about 100 feet of Anderson Truck Trail. Back in the 2,000's the nursery property owner had a beef with this trail. He went as far as to come in with a bulldozer and errect a large sheet metal fence across the trail that became known as "The Great Wall of Boofus". The problem was where he put up the wall was not even on his property. The county got involved and levied some enviromental damage fines on him. It turns out that he also did not have his nursery fully up to code either. These days he apparently has not interest in the trail. So you should be okay to enter here.  There is a bike-wide go-around the wall. 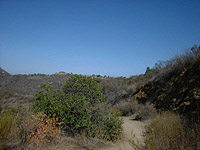 If you don't want to take the orginal entrance you can continue climbing up Peutz Valley Road, at 8/10ths of mile you will see a round tank on the right hand side of the road. Directly across the road from that tank is a the trail.  Take it.  There will be a split to the left after a short bit of climbing. If you take that split it will take you down to ATT just after the Boofus wall. If you keep climbing you will come to another trail that will soon descend sharply drop onto Anderson Truck Trail. Hang a right and continue on. You will have a good mile of fast cruising on a slightly down hill section of singletrack/old 4WD road before you transition into the uphill portion of the trail. The uphill is around 2.5 miles long and can be quite challenging. There are usually multiple lines on the climb so you also get to do some thinking in addition to grunting as you work your way up the trail. 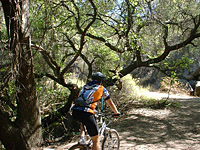 The trail is exposed to the sun for over 99 percent of its route and can be a real brain boiler during the summer-time. The one exception is a small patch of trees at a bend in the trail. You can see that many riders ride the bank of the turn on the way down the hill.  The lower end of Spicolli 2 comes out in this forested area.  It is worth noting that about two turns before you got to this point on the climb you crossed onto US Forest Service Land. 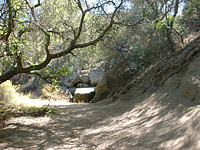 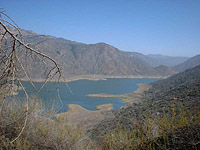 The further up the climb you go the better the views get as you can see more and more of El Capitain Reservoir. Once up to the top you will come to a large dirt area.  This is known as Four Corners.  The USFS has decomissoned/removed a section of Anderson Truck Truck from this point east to the boundary of the the Capitian Grande Indian Reservation.  You can see the the old truck trail bed and the gate from Four Courners. There are several technical side trip singletracks to check out from here. Off to the left there is a trail named Sidewinder and Finding Neo that are mucho fun. Off the right there are "No Name" and Spicolli 1.1 that loops back to the main trail a little bit down the hill. A trail heads south from four corners as well that leads to the Spicolli 2 and 3 trails. 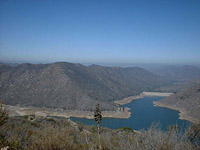 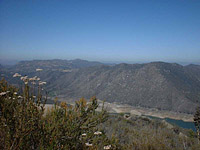 The trails off to the left dump you only a little lower down on ATT. The trails off the right dump you out further down the trail with Spicolli 2 and 3 coming out in the forested area. The theme up here is do the loops until you have had enough then bomb back down Anderson Truck Trail. 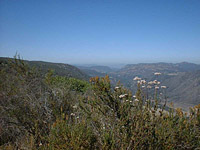 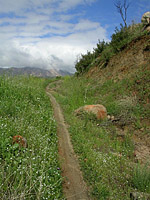 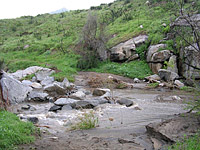 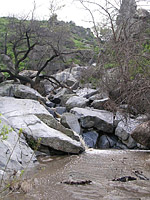 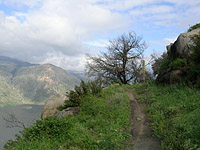 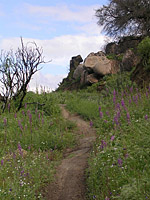 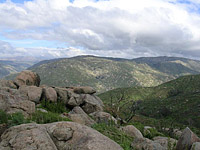 I had my first adventure a little further up Anderson Truck Trail on some of the more chunkier stuff and I must say it was quite technical more geared to the downhill/freeride type riders as there are some nasty spots along this section of trail.

Mondo goes on the same rock.

Steve also "playing" on the rock. 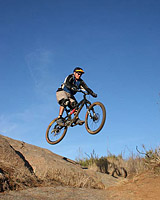 A little air time for Mondo

Steve getting some air

It has worked out that my mid-week ride day and Steve's have been meshing up this fall so I have been taking some flight lessons from Steve at his regular haunt. Word is I have worked my way up to sitting in the back of the short yellow bus to "Air School" 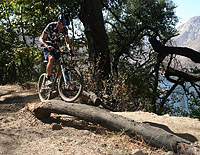 I never get tired of playing out here or taking pictures in the afternoon light. 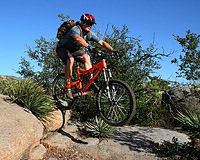 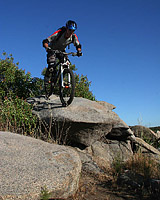