I first rode this trail in 2007.  In 2009, the Station wildfire did a number on the area and the trail. The trail had to be rebuilt in many spots and earlier this year it was offically reopened. The trail is in great shape and has not lost any of its character as a narrow twisty singletrack clinging to the side of a steep mountain. Hats off to the Lowelifes Respectable Citizens’ Club who put in thousands of volunteer hours to make this happen!

Located in the western end of the San Gabriel Mountains north of San Fernando and the Los Angeles basin further to the south this is a truly impressive 22.5 mile ride in the Angeles National Forest. This is a point-to-point route that travels along the Mendenhall Ridge fire road where you are treated to some great views of the surrounding canyons and mountain tops as you mildly climb on an 8% grade for nearly 12 miles. You will then turn your tires onto singletrack where you will pay some further climbing dues on steep and often loose terrain as you work your way up to nearly the top of Condor Peak. The reward for all your efforts is an exceptional eight mile descent on some extremely narrow and often exposed bits of trail that is a real treat for those who love great views and narrow trails.  The Condor Peak trail is not particularly technical but it is quite exposed with rocky cliffs and steep drop-offs in many spots making the penalty for failure here steep. Additionally, while the main bed of the trail is usually pretty firm, the downhill edge of the trail can often be fragile.   This descent is not for the faint of heart and those with less than extremely solid bike and brake control. 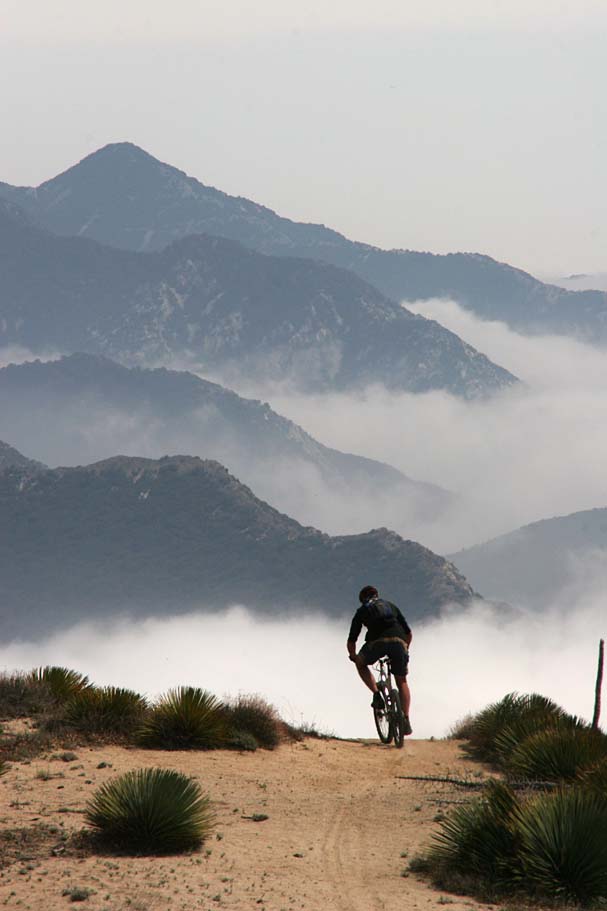 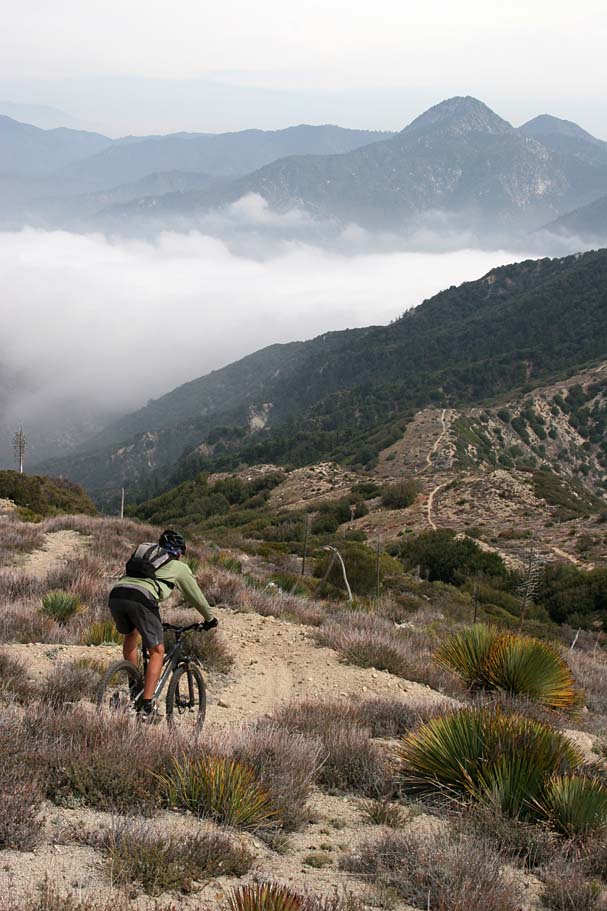 Near the upper end of the Condor Peak Trail 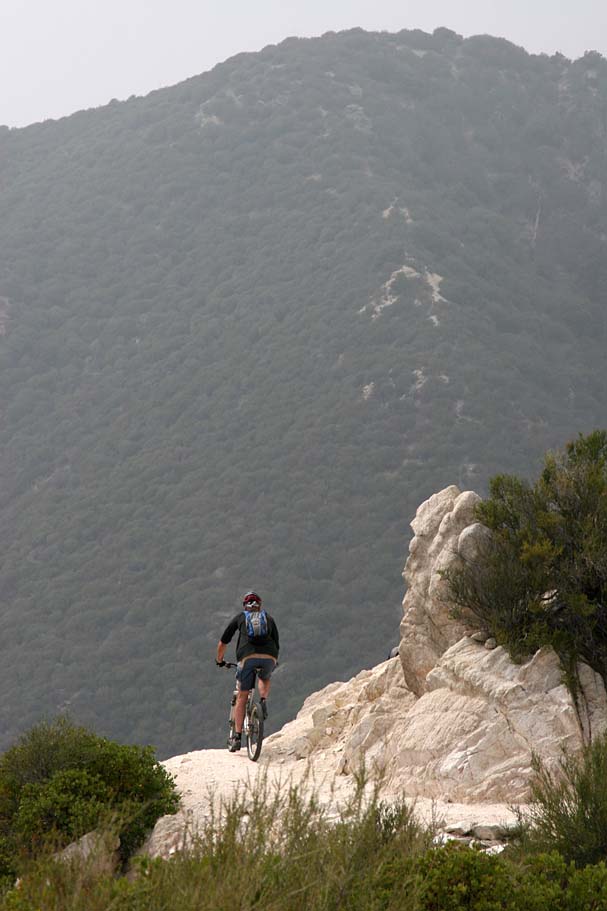 Exposure can be around every corner out here

HAZARDS:  While you maybe close to a San Fernando and the LA basin, you certainly seem way out in the middle of no where. The Codor Peak is not a particularly technical trail but it narrow and has some significant exposure where blowing a turn in some spots could get you a unplanned helicopter ride.   I highly recommend not doing this ride by yourself.

Ride Report: (Nearly all of these pictures are from 2007 before the wildfire. Other than large the pine trees most of the pictures are still relevent.

From the trailhead right off the side of the road on Little Tunjunga Canyon Road we went around the gate and started what would a bunch of gradual climbing.  It was cloudy and overcast when we started but we had climbed for less than one mile when we started to sporadically break out of the clouds.

We often went in and out of the clouds as the mountain thermals of the crisp morning air would often create "drive-by" clouds that would spill over the ridge tops and roll down our side of the ridge and engulf is in a thick misty cloud.  It was pretty cool to watch it happen.  At 2.7 miles we went by Burma Road/FS 3N37 coming up on our right as we approached High Point saddle.  We continued on Mendenhall Ridge (FS 3N32) fire road by staying to our left.

Other photos from this area

At 2.8 miles we went by the junction of FS 4N35 on our left that descends down into Pacoima Canyon.  We stayed to our right and continued climbing uphill.

At 4.7 miles we reached Mendenhall Saddle where the fire road crosses over to the other side of the ridge offering a different set of mountain views.  On this day is was more like a new group of mountain tops poking out above the clouds.    Also at this saddle, the maps show a fire road going off to the right and up to the top of Mendenhall Peak.   I recall looking at this when we went by and thinking that it was the remains of an old road bed, but I can not say much more about it than that. At 5.6 miles we got a wee bit of a break from climbing as Mendenhall Ridge Road rolled along the ridge tops for a while.

The "sea" of clouds with mountain peak "islands" around was inspiring.   I had spent the better part of the first three months of 2007 coping with a cascading series of illnesses that included the flu, respiratory, sinus and ear infections.  After a couple of series of antibiotics and too much time off of the bike, this was the first ride I felt fully "back" and able to put forth any significant effort using fully cooperating body parts.  The incredible scenery reminded me of why I love this sport so much.

At the ridge transition we went by an interesting looking concrete-topped cylinder.  I later found out this is a combination heliport/water tank.   It was a nice spot to grab a snack.

From here the fire road became shaded with mountain style pines trees as we got back into a consistent climbing mode for the next 2.5 miles. It was during this wooded climb that we came across a very young rattle snake that had not even developed its first rattle yet. Normally these guys will make their own way off the trail when they hear or see people approach. This rattler however, was quite content to hang out in the middle of the trail and check us out. Many people simply do not respect these beautiful animals enough to let them live so I generally make it a point to gently encourage/remove them off the trail.

While some might call it harassing the snakes, I think of it as saving them from a potential idiot who might be behind me on the trail.   This little fellow was pretty cooperative for the camera before we got him off the trail.   The telephoto lens was fully utilized for these shots.

At around 9.3 miles we went by a bullet-riddled trailhead sign for the Yerba Buena Trail on our right.  We kept on rolling. At around 11 miles we reached the highest point on this ride at 5,387 feet.    We enjoyed the cruising from here and stopped at an old road gate on our right at 12 miles as the road bends down and to the left.   This is where we left Mendenhall Ridge Road and the double track scene for the day.

From this point, we could look down Mendenhall Ridge Road and see Indian Ben saddle which is the turn off for several other rides in the area.   But for today we looked south to the single track that lay ahead.  I have doctored up the picture to the right to give an indication of the final dues one must pay before getting their just rewards on the downhill portion of the Condor Peak trail.    My cohorts in grime talked about how a couple of the pushes were downright nasty as they would be tough due to the grade alone even if traction was not an issue.

After a bit of break, we started rolling again and started off with bit of descent before the first nasty pitches.  The route up to the peak is not all slogging as there some nice sections of trail. At 12.8 miles we came to the junction of the Trail Canyon trail. We bore to the left and uphill to stay on the Condor Peak trail while Trail Canyon trail goes down and to your right. Another loop option out here is to go up Trail Canyon and then down Condor Peak.

Here are some pictures from near the top of Condor Peak.

Once we got over the peak just to the southeast of Condor Peak, the fun really started happening in earnest.  We were not only treated to an extremely picturesque one mile section of trail down to the base of Fox Hill, we were also kept on your toes as the trail was steep, curvy and loose enough to make us finesse the brakes.

After about a mile and just before it looked like we were going to go straight up Fox Hill on a brutally steep looking trail, the main trail turns slightly downhill and to the right.   For the next 1/2 mile the trail works it's way around the southeast side of Fox Hill. The trail got quite narrow with lots of blind turns around rocks that you would not want to blow to the outside.  We encountered at least one rock slide section that required us to dismount and carry our bikes over to the other side. (The rockslide has since been cleared out)

Once the trail got to the southeast side of Fox Hill it stayed pretty narrow but the average grade increased to between 14 and 17 percent. While this did spell a whole bunch of fun, it did not mean that we were ripping it up at ludicrous speeds the whole way down.  The trail is often times fragile to the downhill side so holding our lines became vitally important. Going stupidly fast on this trail is easily doable on the straight away sections but the combination of exposure, sporadic loose sections and blind turns would make doing so, well.....quite stupid.

There were plenty of those blind outside turns where the penalty for failure could be extreme.  The trail was not particularly technical from a "moves" perspective and with exception of a couple of the rockslide areas, the technical spots and the exposure spots did not coincide.   After a couple of those blind turns I thought to myself that I was glad was not riding solo as if I were to fall into one of these canyons and get busted up, I could quite possible end up being found by a big critter before a person.

When we were about a 1/4th of the way down from Fox Hill views of the Big Tujunga Reservoir came into view far below use.   Make a point to stop and take a look so you do don't blow this turn pictured to the right.

More views from the upper sections of the descent

The trail was not all raw and exposed.  Towards the bottom the trail mellowed out a bit and while it was still fragile on the outside edges, the exposure factor decreased dramatically.

At 21.1 miles the downhill party fest was over when the trail turned back uphill after getting quite close to Big Tujunga road that we drove in on. We continued along the trail where it climbed about 350 feet over the next mile to at saddle (CON-13) before turning back downhill for a .4 mile downhill twisty singletrack run back to the lower trailhead.

Overall I thought this was a fantastic ride.  The San Gabriel Mountains are a bit of haul for me to do as day trip, but I plan on getting in a couple of rides into this area a year.  This entire area was proposed for wilderness at least once by Senator Barbara Boxer's California Wild Heritage Wilderness Act that would have denied mountain bikers access to this trail and many others throughout California.     Wonderful trails like this one are reason enough to support and get involved with your local advocacy group to help keep our access to trails like these as well as the ones in your own backyard open.