I spent a few days in Subic Bay on the Philippine Island of Luzon in April of 2004.  I had not done much research on riding in the area but I found out about this trail off of a tourist map that offered jungle trekking. I was not expecting much, I was pleasantly surprised. 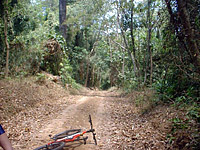 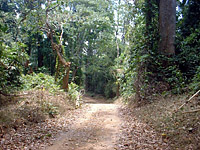 We did a ride on fire road through the Ilanlin forest to see if we could find some single track.  I have to admit we cheated on this ride, as we had our driver drop us off at the end of the paved section of this road on the south side of ridgeline which cut out  about 70% of our climbing that would be required that day. From where we were dropped off we climbed along the fireroad that was almost continually canopied by jungle floral. 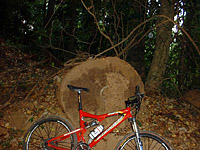 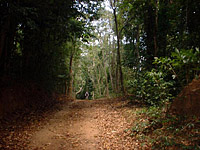 The grade of the climb was not very consistent varying from slight to hella steep, but it was uphill nearly the entire way. The beautiful jungle scenery and the sounds of insects, birds, and other critters made for an exceptional climb.  What the road lacked in technical features was more than made up by jungle environment. 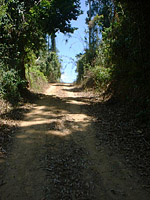 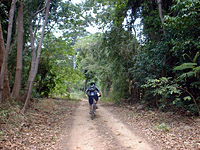 To the left is the final little brute of a climb to the reach of the top of Hill 394.  What was quite noticeable about this climb was that you were breaking out of the jungle canopy towards blue sky.

Here is shot looking down at Subic Bay. 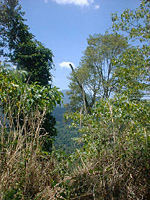 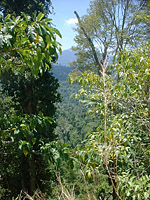 Peaking out at the of Hill 394, brought us stunning views in all directions. We could see Subic Bay in distance and jungle mountainsides in all directions.   The day we were here was hot but there was a nice and welcome breeze to cool us off.  We spent a good bit of time of up top taking in the views before we decided to continue along the road down the other side do the hill. 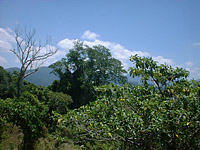 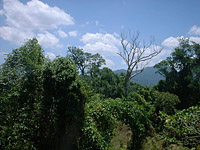 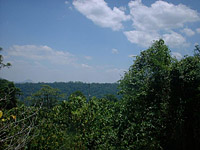 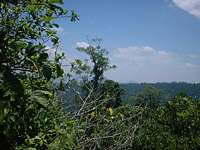 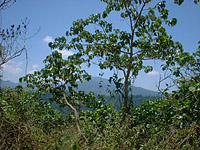 The first 500 yards of so down the backside of the hill was very steep and loose.  There was also some ruts that were partially covered with leaves.  This section called for your full attention which was still hard to do as the views were still incredible.  After the first steep section it was a downhill bombfest which was a blast considering it was basically a fireroad.  It seemed like we flew downhill forever but I think it was a 5 mile descent.   Near the bottom to forest road we found a a singletrack that headed down to waterfall.   We were not sure if this was a hiker only trail but we decided we could afford the 100 peso fine if we were wrong (The current exchange rate made this a $2 fine!).  The first part of the trail descended drastically down a series to stone and root steps.  After the steps the trails was extremely tight and twisty and often times it was small and faint enough to cause you to look twice to make sure you were going the right way.  There was some really gnarly vines in the trees and on two different occasions I got about 6 to 10 feet of the vines entwined  in my rear wheel.  Sometimes the trail took us through hardwood trees and other times the trail cut through groves of bamboo.  This continued until we came to a creek and Boton Falls. 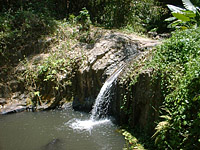 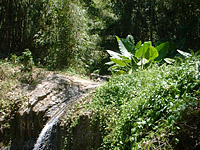 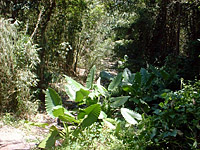 A few pictures of Boton Falls. 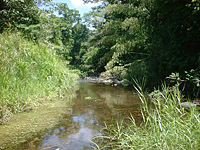 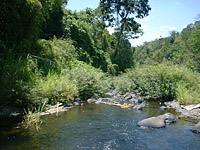 The falls were quite pretty, and it was a great place to take a breather.   After that trail leveled for a while as it followed the creek bed in an more open area with thick vine-like bright green bushes.  Soon we crossed the creek where the trail turned uphill for a bit and back into the combination jungle type trees and bamboo groves.   The trail soon turned downhill again and we enjoyed a little bit more speed.  After about a mile we came down another larger creek where we crossed via a concrete dam.  From there the trail took us out to a road and the end of the trail. 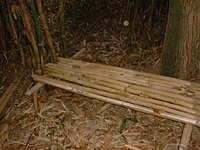 Apparently this is a cot.   We saw several of these while on the ride.  From what I understand if you are going to sleep in the jungle, you do not want to be on ground.  They basically cut down some bamboo build a frame and slap some more bamboo on top.  Cheap living! 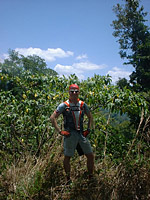 What a freaking poser!

Here is the video shot on the Ilanlin Forest road and the Boton Falls trail.