I had ridden Wilder Ranch in Santa Cruz once before in 2002.  I had forgotten just how pretty this place was.  Here is the ride report from my 2002 visit.   There are basically three primary types of ecosystems going on at Wilder Ranch.  You have grasslands, deeply shaded redwood forests and somewhat airy hardwood forests with thick undergrowth.    The transitions between these areas are for the most part abrupt which I find to be really cool. You can be cruising along across a grassy hillside then all of the sudden be in the dark shade of the redwoods.

Directions: From Santa Cruz take HWY 1 north out of Santa Cruz. About 2 miles out of town, you'll see the Wilder Ranch complex on the left.

Ride Notes:  While you will want refer to my original ride report about the area for specific trail descriptions, I just describe the route we took this day.  We started from the parking lot and climbed up Engelman's Loop (Taking the right-hand split at the bottom) to Long Meadow.   We then took Long Meadow up the top of the park.  From the top of the park you have other trail options you can tie together that are outside of the park.  The Gray Whale Ranch area just east of Wilder Ranch and west of the UC Santa Cruz grounds have some excellent trails.  To the north is the Henry Cowell State Park that also has some options.  The Gray Whale Ranch was privately owned ranchland that became a part of the State Park in November 1997.  While there are plenty of well-used trails in the ranch area, they do not show up on the Wilder Ranch maps.  I'm not sure about the politics regarding these trails but with just a little investigation you will find plenty of options to go bigger should you choose to do so. 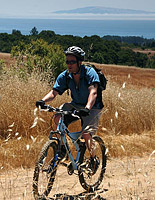 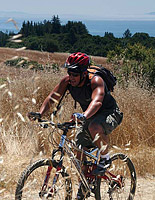 From the top of the park we took one of the Gray Whale Ranch trail's back downhill and made our way back to the junction of Engelmann and Long Meadow.   From there we took the Wild Boar trail and the Old Cabin Trail.  The Old Cabin trail is not to be missed.  It is shaded in the Redwoods and while short it is a bunch of swooping bit of fun.

Photos from the along the Old Cabin Trail.

After the Old Cabin Trail we were back out in the grassland as we made our way over to the Enchanted Loop.  I'm pretty sure the place gets its name because of the flora inside of the redwoods is simply awesome.  Wither you do the loop clockwise or counterclockwise you are going to be climbing out.  I have done this loop in both directions and I have a little preference for the counterclockwise way.  From there we had a zippy descent down to the coast via the Baldwin trail.  The trail along the coast is a double track that runs right along the bluffs overlooking the ocean.  It is exceptionally pretty and also not to be missed.  It is pretty hard to get lost along the ocean, but in many spots there is also a double track on the edge of the agriculture fields in addition to the trail.   Make sure to take the splits that keep you closet to the bluffs.

Here are some shots along the bluffs.

All together we did a little over 20 miles at Wilder Ranch.  We spent the rest of the evening kicking back and enjoying a mighty yummy dinner. 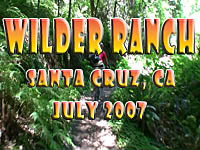 Here is the video from that day's ride. Right Click to download the 61MB video that is 4 minutes and 29 seconds long.