Freeman Creek and the Giant Sequoia

Directions: From Los Angeles it is about a 200 mile trip.   Drive north on interstate 5, then take highway 99 north.  North of Bakersfield take CA65.  In Porterville, go east on CA190.  About 28 miles beyond Springville and a super long series of switchbacks, you will come to 21S50 on your left.  To go directly to the trailhead turn left and take the first dirt road on your right about .5 miles up the road and park in the dirt lot. If you are going to the Quaking Aspens campground , stay on CA190 and the road will make a quick right hand turn and will now be called the Western Divide Highway.  Almost immediately, the entrance to the campground is on your right.

Ride Notes: Greg and I managed to escape from LA on Friday just before a brush fire turned Interstate 5 into an ugly bumper-to-bumper mess for hours that would hamper Jerry and Bill's run for singletrack freedom.  The plan was to meet up in Kernville and then head up to our campsite.  Greg and I made what turned out to be a really good call and shot straight up to the Quaking Aspens campground, not even a mile from the trailhead.   Our Saturday ride was going to be the Cannell Trail with some bonus mileage up to Sherman Peak so after setting up camp alongside the meadow, Greg and I headed down to Kernville to meet up with our delayed cohorts and leave my truck in town to be used as the shuttle return vehicle the following day.  The timing was perfect as we waited less than 10 minutes for Jerry and Bill.   We arrived back at camp after dark and had some pre-ride hydration that included some mighty fine brews with roots in Bend, Oregon and San Marcos, California.   Greg and I had the pleasure of seeing the meadow the evening before, but Jerry and Bill were quite impressed with the views from their tent windows in the morning.   The Cannell trail was a bunch of fun, but that is another story.

Our base camp for the weekend's riding.

Sunday was the Freeman Creek trail (USFS trail 32E20).   We rode our bikes right from camp and within a mile we where at the turnoff for the trail.  You rolled down a couple 10ths of a mile on fire road before the singletrack started.  The singletrack was a real treat as it was mostly a buff trail that also had really good flow.  There are some pretty impressive large firs in the upper end, but it is not until you are about a mile down the trail until you start passing by the giant sequoias.   My pictures are absolutely inadequate at capturing the impressiveness of these trees.

The Freeman Creek trail is 4.4 miles long and drops roughly 1,500 feet into the Lloyd Meadows and Pyle's Camp area.  Most of that elevation is lost in the first 3 miles of the trail.  On the map you will see a red trail in addition to the blue trail.  The blue line is the trail as it is shown on the USGS topographic maps.  My GPS lost lock several times under the tree canopy during this descent causing quite a few large errors.  From what I can tell there are indications that the trail varies somewhat from the map.  The red plot is my best guess based on what data I did get and the contour riding I remembered doing that day.  While we did stop to ogle and gawk at the giants our plan was to enjoy a good downhill rip and save most of the picture taking for the climb when we could use an excuse for taking a break. :-)

The trail from the George Bush tree out to forest service road 22S82 (Point C) gets sandy and sees some horse traffic. It is still a pretty good trail but you are now in just mere pine trees.  On this ride we hung a left on the paved road and did come gradual climbing  up to Point D.  (Refer to the large scale map if you want to see this optional trail) Once at Point D, we hooked up with 33E20 which I think is called the Lloyd Meadows trail.  This was supposed to be a mostly gradual downhill singletrack so we were optimistic that it was going to be bunch of fun.   While there was some fun sections along it, it was quite sandy and beat up from horse traffic.  There was even one section we called "The Sahara" as it was a big sandy pit that sucked the will to peddle right out your legs.  At Point E, the trail crossed a dirt road that heads out to the forks of the Kern River.   Based on the poor trail conditions and several equestrians we could see ahead on the trail

we decided that this trail would mostly like not get any better so we opted to turn west on the dirt road and go back to the pavement and return to the Freeman Creek Trail.  Just before getting back to the Freeman Creek Trail there is a dirt road on your right that offers access out to the President George Bush Tree.  We opted to bypass the lower portion of the trail and take the access road.   At the tree we rejoined the Freeman Creek trail and started our climb out.   The climbing was no where near as difficult as we thought it would be but we were stopping often to check out the trees and enjoy the trail.   If you hammer up this trail you are one Grade-A Bonehead. Save the training and conditioning for your local stuff, these trees are some of the oldest living things on the planet, enjoy yourself and take everything in.

Once we had made it back up to the paved road at the top we hung a right and pedaled uphill for 3/4ths of a mile and turned left onto the a forest service road. Two tenths of a mile later you will see a singletrack coming onto the road from right.  Continue on the forest road (I'll talk about the singletrack later).   The forest road will bend around to your left and south and follow along a meadow on your right.  At the end of that meadow, which is at  .6 miles from the pavement, the road ends and singletrack continues straight through a cattle gate (Close behind you).  The singletrack from this point is downhill and narrow with some switchbacks and numerous spots where the brush is encroaching into the trail.  The trail has a raw feel to it that does not see too much traffic on it.  It was quite a blast.  It dumps you out onto highway 190 where you can either turn left and go uphill back to your car or pickup the trail across the street and cut  across a meadow and uphill into the Quaking Aspens campground.   Either way you choose you are less than a half mile from where you started the ride.

There is no shortage of singletrack on the maps for this area and I plan on snooping around more during future visits to the Southern Sierras.  On the large scale map of this area I have annotated some other trails that were on the snoop list that we did not get around to during this visit.   You could continue climbing up the paved road 21S50 and pick the singletrack I mentioned earlier further up the mountainside.   I have labeled the spots where the singletrack in the area crosses the roads with letters.  The roads goes up very close to the borders of the Golden Trout Wilderness Area.  These trails could end up being a bust like our experience at Lloyd Meadows, but you never know if there could be a real gem of a trail up there.  Exploration rides in the backcountry can turn ugly in a hurry even when you are prepared so take plenty of precautions if you and your buddies decide to do some snooping.

Please disregard my pictures of the nice singletrack and flowing lines from the video. The forest service in conjunction with "Trails (or is Sanitizers) Unlimited" came in a few weeks after I shot the video and basically destroyed the singletrack, turning into a freaking road that looks like this. I have friend who went back here almost a year later and classified the trail as "sad". 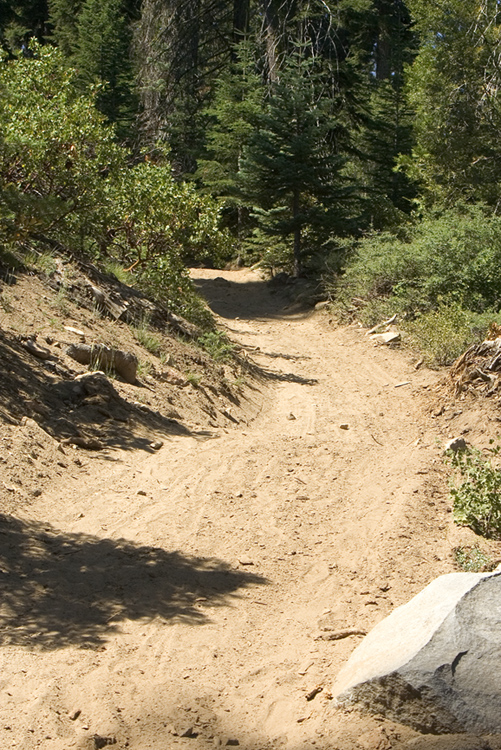 This is a bunch of crap. The trail could have used a little nip and tuck here and there as well as little debrushing in a couple of spots , but what they did is absolutely dumb. I'm surprised they did not cut down some of the ancient Sequoias to make room for the "trail". Take a look at the video and tell me if you think that level of maintenance was needed. I am really scared to think of what other active contracts the US Forest Service has with "Trails Unlimited" throughout the country.

Here is a letter to the editior of the Southern Sierra Messenger from a conservation group concerning the "maintenance".

If the actions of the Forest Service pisses you off then voice your displeasure by writing the forest service office at: